Posted at 11:12h in Uncategorized by Abigail Bowman

With a projected 16 weeks left in her pregnancy, Kayla Weiss was terrified when, at a routine checkup appointment, her doctor said she needed an emergency C-section, at 24 weeks pregnant.

Living in Acworth, Georgia, Kayla and her husband Austyn had not planned on traveling almost two hours to deliver their baby, especially this early into the pregnancy.

“The night before everything was fine,” Kayla said. “We had the whole day planned and we were even going to get my haircut. Then all of this happened,” Austyn said.

Once the doctors took Kayla’s blood pressure at her morning appointment, “they said I needed to get to the hospital; they transferred me to Erlanger,” said Kayla.

Checking into the hospital April 23 for an emergency C-section, Kayla gave birth to a baby girl, Paisley, at 24 weeks pregnant. 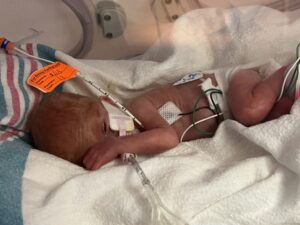 Paisley weighed 14 ounces, the smallest baby we currently have at Chattanooga RMHC.

“Seeing her feet, her little feet. They’re not bigger than my index finger,” Austyn said affectionately as he thought about the day Paisley was born.

After Kayla’s C-section, the doctors needed to keep her in the hospital for a few days.  Austyn and Kayla slept at Erlanger while Paisley stayed in the NICU.

A few days later, Austyn and Kayla were told about the Ronald McDonald House and checked in April 28. The Weiss’ had yet to hold their five day old baby when they checked into RMHC.

It was not until two weeks after Paisley was born that her parents could hold her. 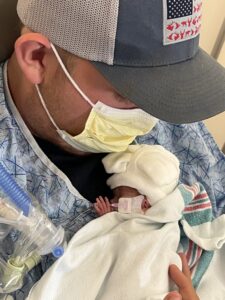 “It felt amazing. I still can’t describe the feelings I felt, just a lot of emotions,” said Kayla. “It was emotional,” said Austyn. “Finally being able to compare how big she was to your hand,” he said as he compared the size of Paisley to the palm of his hand, her body not large enough to cover it all.

Having a long journey ahead of them before they can take Paisley home, Austyn and Kayla have learned how to rely on each other, and The Ronald McDonald House, as they navigate this difficult time.

“You get tired and worn out at times, but you know everything is going well with the doctors so sometimes you need to get your mind off of it,” said Austyn. “The doctors over there are really good and they are going to take care of your baby,” said Kayla. “We’ve learned to just be there for each other.”

Now that Paisley has been under Erlanger’s care for over 80 days, Austyn and Kayla have gotten to experience the relief of being so close to their daughter.

“The day we found out she had a brain bleed, I was up there by myself and he was still in bed, but then he texted me and asked if everything was okay and I said you need to come up here,” said Kayla. “He was up there within five minutes.”

Having had bleeding on her brain since birth, the doctors continue to closely monitor Paisley’s growth and well as weight changes. Despite the challenges resulting in a breathing tube to being put on CPAP, Paisley has grown to over three pounds now and the doctors are hoping to release Paisley to go home on her original due date, August 8.

Even though this time has been difficult, Paisley’s personality is starting to shine and the role of Mom and Dad are starting to sink in for Kayla and Austyn.

“They’ll start changing her diaper and she’ll open her eyes trying to figure out who’s doing it to her, it’s really cute,” said Kayla. “She’ll start moving her arms and legs around and since she’s so little, she doesn’t have any muscle so she’ll get so tired,” said Austyn. 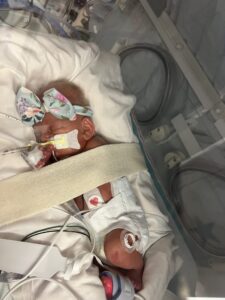 The Weiss family has experienced the difficulties of being apart from their daughter as well as watching her go through battles of healing.

“She’s supposed to still be inside of me, but she’s not. So I don’t want to leave her,” said Kayla.

Thankfully, because of support from the community and those who care for our mission and families, we are able to provide a home across the street so Austyn and Kayla can stay close to their child.