Posted at 14:15h in Uncategorized by Abigail 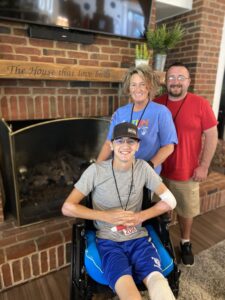 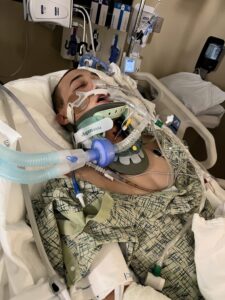 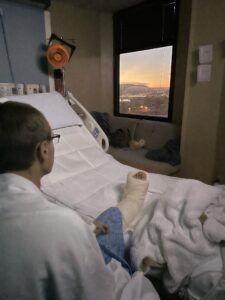 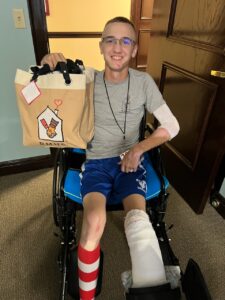 When nineteen year old Kaigan’s motorcycle ride turned into a life-threatening accident, his parents rushed in the car to drive two hours away from home and sleep in the hospital parking garage, all to be as close as possible to their son.

Seeing two dips in the road on Highway 60 going to North Carolina, Kaigan thought he had a handle on the familiar bumpy road he was riding that Monday afternoon. Getting the first dip under control was easy for him, but the second bump in the road wobbled the back of his bike throwing him off the motorcycle about 100 yards and his bike sliding 408 feet.

“I remember trying to get up, but I looked down and about that time, my ankle just snapped and bones were everywhere,” said Kaigan. “Tendons [were] hanging out, blood gushing because I cut my blood vessel wide open. I’m sitting there in my own puddle of blood, literally my own puddle of blood.” 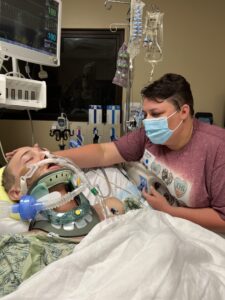 Thankfully he was riding alongside a friend that day who immediately called Kaigan’s mom after the accident. Being the Chief Deputy Coroner in their county, Kaigan’s mother, Rebecca, knew exactly how to help.

“I called dispatch and said I need a med unit going this way because that is my son,” said Rebecca. “The first two responders were an ER doctor from Erlanger in Murphy and an ER nurse that works at the Erlanger in Murphy. The doctor went ahead and called for life force, they were able to get to the scene, and had already initiated everything that should’ve been done. They were our true blessings.”

After sending a medical unit to the scene of the accident, Rebecca, along with Kaigan’s stepfather, father, and stepmother, all rushed to him.

“When we get to the scene, I’m thinking of a motorcycle wreck [and] I thought oh maybe he’s got some scratches or broken bones,” Rebecca said. “When they came out of the ambulance bagging him, I lost my mind. I started praying over him, [that] God will pull us through whatever is coming our way, but when they took off with him in the helicopter, it was like my life was shattered. He’s my baby and he’s my heart, he’s my life.”

Once Kaigan arrived to Erlanger East in Chattanooga, he was in the trauma unit on a ventilator, bandaged from head to toe, for days. Once his parents all arrived to the hospital, they could not see him until 11 that night, hours after the accident. Shortly after, Kaigan was transferred to Neuro-ICU and they could not see him until the morning, but that didn’t stop any of them from staying as close as possible to their son. 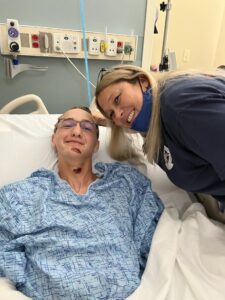 (Kaigan takes a photo with an Erlanger nurse who has made an impact on their family.)

Spending the first two nights of Kaigan’s hospital stay in the parking garage and the next night in a motel ten minutes from the hospital, all of the parents realized Kaigan was going to be in the hospital for some time and they needed their sleeping arrangements to change.

“I had severe anxiety because I was 10 minutes away,” said Rebecca. “You’re not getting rest, but the biggest thing for being here was I actually did get to lay my head down and go to sleep because I knew that if something happened, I was a second away.”

Checking into the Chattanooga Ronald McDonald House, all of Kaigan’s parents were able to safely sleep across the street from the hospital, only minutes away from him.

“It’s a loving and warm environment, so it’s almost like home. We have all the necessities we need here that we would have at home,” said Rebecca. “Everybody in this house has a child that’s in that hospital. Whether or not we know them, it’s good therapy to talk to them, its good therapy for them to talk to you.”

“[It’s] just somebody else to talk to. Sometimes people need that,” said David Hughson, Kaigan’s stepfather.

Kaigan had no idea where his parents were staying for the first two weeks in the hospital. After he was able to sit in a wheelchair and stroll around the hospital, his parents showed him where they had been staying. 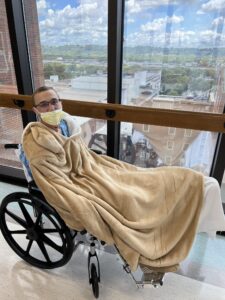 “Whenever I actually got to see it, it was a relief. Your mom and the people that care about you are literally right across the street,” said Kaigan. “They can come see me as soon as they can. It was definitely a big relief for me, not having to stress if something happens like they won’t be able to come as soon as it happens, you know. Mom and dad and all them, right across the road, super close, it was a blessing.”

Now with about a year of healing ahead from road rash, broken bones and a heel replacement, Kaigan and his family will still be able to rely on the Ronald McDonald House during their next doctor’s appointments.

“For a two hour drive, it’s a lot easier to get here the night before, and not have to drive straight in because his foot needs to be elevated,” said David. “The drive is very uncomfortable for him so this has been a blessing for us just by transitioning,” said Rebecca. 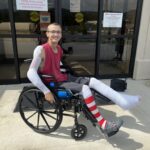 After staying at the Ronald McDonald House for weeks to checking in for a few nights each week for doctor’s appointments, the Mull family has been able to truly understand the healing power of staying right across the street from each other.

“I can’t even begin to say what a blessing this place is, honestly. What the Ronald McDonald House has given to our family,” said Rebecca. “This is really what has put it into perspective for me being here: when you go through McDonald’s and see the change thing and you’re thinking if I donate money, does that really go to them? When I walk through these doors and I saw what that donation does, it changed my perspective on giving to the Ronald McDonald House.”